Inspired By… House of Cards

One show that continues to gain popularity since its release on Netflix is House of Cards. With tons of drama, humor and an inside look at the world of politics, fans believe there’s nothing better. Not only is House of Cards full of great characters and stories, but it also contains an inspiring amount of business fashion. Check out some of these great outfits that have made their way to the screen during this hit television show:

During one of season three’s episodes, Jackie Sharp (played by Molly Parker) was seen wearing this amazing business-ready outfit. At first glance, it looks like this ensemble could be a mix of two, high-fashion pieces. Perhaps a chic colorblocked top and pencil skirt mashup. But, upon further inspection, it’s not! If you’re looking to impress your coworkers, try modeling your next outfit off of Jackie. You’ll definitely be a standout at the office!

Next we have something that every boss lady should definitely have in their wardrobe. This little number appeared on an episode from season two. Claire Underwood (Robin Wright), the sassy wife of the main character, showed she meant business when she walked on screen in this Armani jacket. The front zipper and striped texture give it just the right amount of edge, while still keeping the overall look appropriate enough for the office.

In House of Cards, Jackie Sharp might as well be called the “Queen of Tweed.” All of her dresses look amazing. They’re fierce, chic and totally suitable for a girl in big business. I’m especially in love with this option because it incorporates a mixture of four different colors. While the lighter shades are more neutral, the slice of red near her shoulder makes the dress pop. Wear something like this to a fancy lunch date with your business partners and watch the magic happen.

Don’t get me wrong; I love the idea of a solid pencil skirt. Though that’s true, what really makes this outfit standout is Claire’s mixture of prints and colors. Pairing a pink skirt with a blue and white top—who would have thought of it? Overall, it makes for a great business-casual look that would be perfect for a laid back Friday at the office. Or, you know, an interview for your next CEO position. 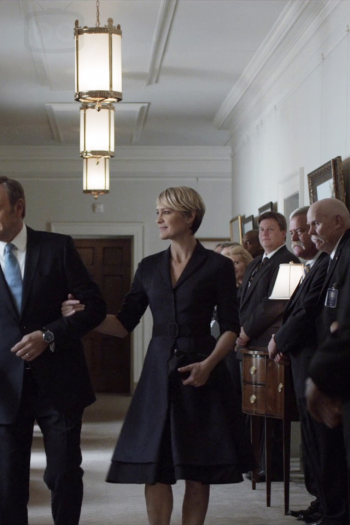 This piece is one of my all-time favorite outfits that I’ve seen on House of Cards. Appearing in an episode from season two, this piece is an eye catcher. It proves that looks can be deceiving! What you think is a great jacket is actually a dress. By adding a sophisticated waist belt to the mix, Claire proves she can look stunning in anything. If you’re looking to update your work wardrobe, consider taking a few lessons from this woman—you won’t regret it.

Watching House of Cards might be a favorite pastime for some people, but always remember that you could use it to open up your eyes to the world of high-class business fashion. By checking out what the ladies of this Netflix series are wearing, you could find yourself an entire new wardrobe by the time you’re finished!