Women’s Fashion in the Victorian Era

Queen Victoria, who reigned from 1837-1901, was one of the first women to rule over the British Empire. Before she came onto the world stage, fashion was mainly a man’s business, since men were the ones in the spotlight. But now, people started caring a lot more about how women dressed; a new fashion era had started. Women would flaunt their wealth and power with their clothes, leading to impressive and even impractical fashion developments.

In the early 1840s, long hoop skirts were the height of fashion. These skirts would be supported by lots of petticoats and padding. Dresses were made with wide shoulders, narrow waists, and wide skirts, which accentuated women’s hourglass figure.

The French preferred smooth bodices, and the English preferred fan bodices, but both were tight and fitted. The bodice of the dress would normally have long, narrow sleeves, which sometimes made it hard for the wearer to lift her arms. Because of this, sleeves started widening as the decade progressed. Unfortunately, though, dresses didn’t become any more comfortable, because the skirts only got wider and stiffer.

Starting in the 1850s, flounces became popular among the very rich, as they were hard to make and very expensive. Tailors would make fabrics designed especially for flounce dresses. These fabrics were made with intricate lace or floral patterns and were cut into strips to make them easier to sew on.

In 1856, they invented the crinoline cage, which made skirts even wider more dramatic- and thus, more impractical! Sometimes, women couldn’t even fit through doors on account of their full, stiff skirts.

Jackets also changed in this decade; they were long and went past the hips. Matching your skirt and jacket fabric wasn’t crucial, but matching colors was expected. Instead of think and narrow sleeves, the 1850s saw wide pagoda sleeves with lots of ruffles.

In the 1860s in America, the Civil War caused a fabric shortage, and as a result flounces disappeared almost entirely; no one wanted to waste all that precious fabric on functionless decorations- no matter how pretty they were.

Throughout the fashion world, skirts were changing. They were getting slightly narrower, and took on conical and elliptical shapes. In 1867, skirts got smaller and were looped up so they weren’t so easy to trip over. Since you could see women’s petticoats underneath the looped skirt, overskirts came onto the fashion scene. The hoop skirt disappeared by the 1870s, making way for the bustle to come onto the scene.

Skirts with bustles were full in shape and had fabric gathered into a large bump in the back. Many dresses had trains, but those that were made for daily use just touched the floor. Overskirts covered in trimmings (frills and ruffles) were essential, and one could be kicked out of a fancy establishment for not wearing one.

Bodices would end at the natural waist and be tucked under the overskirt and attached with a bow. However, this trend didn’t last long, as short overskirts, called basques, were introduced. People found it troublesome to put on a bodice, a basque, and a skirt, and so attached the bodice to the basque, thus creating the polonaise (a bodice that goes way past the hips, essentially becoming a bodice-overskirt combination).

By the mid-1870s, even more ruffles and trimmings were added, but the bustle got smaller. Many of those added ruffles had functional purposes, as ruffles on the inside of the train would keep the hem a few inches away from the dirt. Petticoats also helped with keeping hems clean. Because of all this extra fabric, heavy cloth went out of style in favor of lighter, more wearable ones.

By the 1880s, the bustle had all but disappeared, as a more natural silhouette fell into favor. The cuirass bodice and the princess dress featured smooth lines that followed closely a woman’s true shape with few extra ruffles or decorations. Controversial tie-back skirts would hug a woman’s legs and show them off. These skirts would even have strings inside that you could tie (hence the name) to your legs in order to show off their shape. The extra fabric would hang in the back and leave a long train.

Bodices got simpler, as more emphasis was placed on the skirt. Bodices had simple puffs or lace on the sleeves. The overskirt fell out of fashion as people started sewing all the fancy decorations directly onto the skirt. By 1880, most women were wearing fan skirts; skirts whose back was tied up around knee height, allowing the excess fabric to trail behind her legs in a fan-like shape. 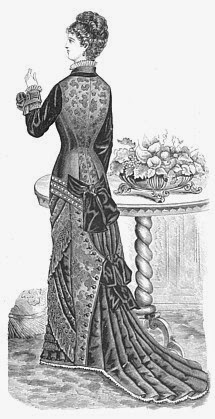 This didn’t stay in style for long, and was replaced by skirts without trains. Instead of having the fans and frills trail behind them, French women wore pannier skirts, which had those decorations on the hips instead.

These pannier drapes reminded people of the beautiful, full-figured bustle look, and the fashion world brought bustles back enthusiastically. The mid 1880s saw huge bustles paired with otherwise slender silhouettes, which gave women the best of both the slim and curvy looks. To make room for the bustle, bodices shortened to above the hips. Decorations, such as poufs and drapes, were added anywhere they would fit and there was little undecorated space.

In the 1890s, Victorian fashion did another turnaround, and bustles fell out of fashion again. Even the poufs and drapes were quickly abandoned in favor of simpler lines. Sleeves, however, went from slim to enormous as they had to compensate for the plain skirts. In general, bodices became the focus of a women’s outfit, and more attention was paid to necklines and shoulders. To achieve the large, poufy balloon sleeves, women would sometimes wear contraptions much like the ones crinolines worn earlier in the era.

Why all the dramatic reversals of fashion so soon after each other? Well, as I mentioned earlier, women were expected to show off their husband’s wealth with their clothes. If you were able to buy a whole new wardrobe every few years, not only would you always be on trend, but you’d prove to everyone that your family was wealthy enough to do support your every fashion desire.

Today, we mostly look at Victorian fashion as something we should be glad to have moved beyond. The garments were expensive, uncomfortable, and difficult to maintain. However, it has gotten a second life in Steampunk culture, which mirrors many of the popular Victorian looks and attitudes. Industrial technology was speeding forward in the 1800s, but was far away from the worlds of the women who’d conduct business with their husbands in parlors and parks. Steampunk combines the industrial and baroque aesthetics of the Victorian era into one, giving us some interesting and beautiful results.

Like this modern variation on a looped pannier skirt

Or this interpretation of a flouncy hoop skirt

And even this miniskirt with a bustle!